A detailed knowledge of the genes and signaling pathways mutated in cancer will be required to develop the novel targetbased cancer therapeutics. However, the heterogeneity and complexity of genomic alterations in most human cancers hamper straightforward identification of cancer-causing mutations. We use the retrovirus-infected mice as model systems for identifying new cancer genes efficiently. Retroviruses induce tumors through activation of proto-oncogenes or inactivation of tumor suppressor genes as a consequence of retroviral integrations into host genome. Thus the viral integration sites provide powerful genetic tags for cancer gene identification. We are exploring the novel molecular targets for cancer treatment based on functional characterization of the cancer genes isolated by high-throughput screens using retroviral insertional mutagenesis. Once these genes are identified, we use gene knockout and transgenic mice to understand how these genes function in tumorigenesis, and to develop new animal models for human cancer. Our current projects are as follows.
1) Identification of novel cancer genes using retroviral insertional mutagenesis in mice
2) Involvement of histone methyltransferases and demethylases in the initiation and progression of cancer
3) The role of three families of enzymes in DNA demethylation pathway on cancer development
4) Functional analysis of the novel cancer genes using conditional knockout mice

Bloom syndrome is a recessive genetic disorder associated with genomic instability that causes affected people to be prone to cancer. The mutant mice for Bloom (Blm) gene showed increased rate of sister chromatid exchange, somatic recombination and loss of heterozygosity. The Blm mutant mice enhance our ability to identify tumor suppressor genes, because the tumors derived from virus-infected Blm mice are more likely to carry viral integrations in both alleles of tumor suppressor genes through their genomic instability. 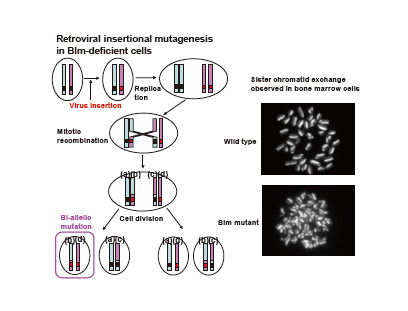 Fig.2 ■Most of the genes that encode histone methyltransferases and demethylases are shown to be the targets of retroviral insertional mutagenesis in mice

Histone modifications have important roles in regulating gene expression and genome function by establishing global chromatin environments. The methylation of four lysine (K) residues on the tail of histone H3 (K4, K9, K27 and K36) is regulated by a large number of histone methyltransferases and demethylases. Among them, most of the genes (shown in red) were identified as the targets of retroviral integrations, which indicated their important roles in oncogenesis. 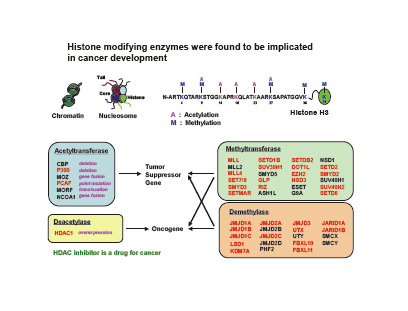